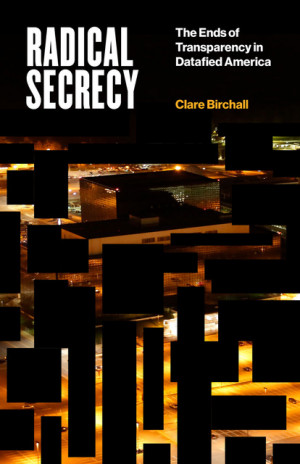 In this talk, Clare Birchall will build on some of the ideas explored in her book, Radical Secrecy: The Ends of Transparency in Datafied America. In an era of data surveillance and individualising calls to monitor open government data, is it salient to rely on transparency as a social panacea? How might transparency serve agendas that are far from transparent? Can we imagine a secrecy that could act in the service of, rather than against, a progressive politics? While the book tries to answer these questions, this talk focuses on what radical transparency might mean particularly in the era of digital data, with “radical” employed in terms of politics rather than scale.

Dr Clare Birchall is a Reader in Contemporary Culture at King’s College London. Before arriving at King’s in 2012, Dr Birchall taught Cultural and Media Studies at the University of Kent and Middlesex University. With a first degree in English from Exeter University, Dr Birchall went on to study Critical Theory at Sussex University.

Dr Birchall is the author of Radical Secrecy: The Ends of Transparency in Datafied America, Shareveillance: The Dangers of Openly Sharing and Covertly Collecting Data, and Knowledge Goes Pop: From Conspiracy Theory to Gossip. Her research is concerned with contested knowledges, the politics of visibilities, surveillance and digital culture. Dr Birchall worked on an AHRC-funded research grant on Covid-19 conspiracy theories and is currently writing a co-authored book on the subject. She is also the Co-I on a 3-year AHRC-funded project on what difference the internet has made to conspiracy theories. She was part of a 5-year EU-COST funded research network on Conspiracy Theoriesas well as an ESRC-funded series of research seminars on privacy issues entitled ‘DATA – PSST! Debating and Assessing Transparency Arrangements – Privacy, Security, Surveillance, Trust’.

This event will be held virtually. All ticket holders have an opportunity to participate via question submission during the Q&A portion of the seminar.