The funding helped Alexis and his team prepare a bid to develop an innovative approach to game-based learning. The collaborative project would benefit students, teachers, and game designers.

A game prototype articulates multiple causal chains in a game format, allowing students to explore causal links iteratively through play to discover and formalise the relationship between the games’ variables on their own in a formal school setting.

The bid was successful, and a prototype was delivered. Industrial Re:evolution is a management puzzle game used to explore the causes of the industrial revolution and the impact it had on England and Wales. 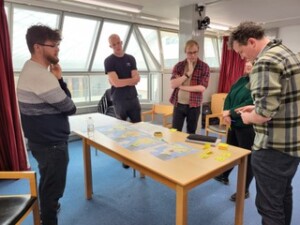 Alexis led a team of teachers, game designers, lecturers, and students; their first task was to produce a paper prototype of what a game exploring the industrial revolution might look like. During their first workshop together, Alexis and his co-lead, Dr Juan Hiriart, mapped out the creative process and its pedagogical and scientific objectives.

Dividing the team into two groups, they each designed and prepared a prototype proposal – these were consolidated into one unified and cohesive vision. A period of fine-tuning of the prototype followed, and an interactive digital version was produced, ready for the next step at the second workshop. 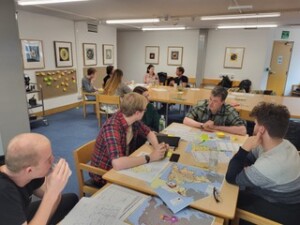 This session was used to refine and improve, ensuring the goals and focus of the game were realised. Smaller groups playtested the digital prototype; a group of students joined the team for this testing process. Feedback was shared between the developers, researchers, and teachers.

Again, this was followed by refining and streamlining some of the processes. The main focus would now be to improve the user interface and better communication of the game’s systems to the player.

The project now had its game but still needed to answer the question of how teachers could use the game to enhance learning about the Industrial Revolution. The team’s educational professionals and students discussed how the game could be best utilised in a classroom setting, how students would connect with the game; incorporation into educational modules and curriculums and whether it should be a passive or active tool. 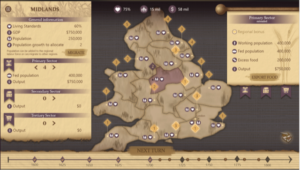 Members of the team would now be integrated into the game itself by way of characters based on them. The second workshop concluded with some character and narrative development in role-play situations.

An effective user interface, and the use and presentation of the game were the focus of workshop three. After a complete overhaul of the interface, a tutorial and glossary to aid new players were implemented. Then the team were ready to take it to the next stage working with teachers and researchers to design the learning objectives. This involved surveys sent to secondary schools across Europe and America.

With the artistic design elements – in the form of character illustrations, map textures, and colour palettes – bringing it all to life, the prototype is now available for download.

Dr Alexis Litvine: “The funding provided by CDH allowed to develop a first prototype of the game and host a series of workshops with school teachers, game developers and academics. Without this funding we would not have been able to put this project together and apply for more funding to carry on. Thank you to CDH for supporting us!”